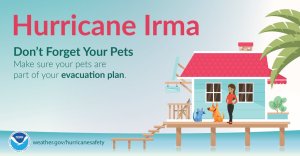 Hurricane Harvey and the incoming hurricane Irma are teaching us many things as a nation, including putting a spotlight on animal welfare organizations and their disaster plans (or lack there of).  The hours following up to hurricane Harvey had cries of protest happening all over animal welfare social media as word came out that several shelters were euthanizing all their animals ahead of the storm.  Other groups were rushing in to help evacuate or simply just take these group’s animals to avoid them being killed, abandoned, or put through the flooding with no idea if they could survive it.

What this told me (and many others) is that too many animal shelters and wildlife sanctuaries do not have a disaster response plan in place.  And that, in of itself, is absolutely tragic.  Animals brought into the care of a facility are completely dependent upon that facility, and responsible care includes having a plan for when things go wrong.

So, have a plan.  If you are involved with an animal welfare group, ask what the plan is for flooding, fire, earthquake, tornado, etc.  Even if a natural disaster is not common in your area, it’s still smart to have a plan for it.  And there shouldn’t just be a plan written up and sitting in a binder to collect dust.  That plan should be discussed at volunteer and employee trainings, and semi-annual practice runs should occur (keeping the animal’s safety and well-being in mind… maybe use stuffed animals to replicate the animals in your care so they are not being subjected to evacuations on a regular basis).

It should be ingrained in your team’s minds what to do when disaster strikes.  So in the horrible off-chance it does, you know what to do and how to help get yourselves and those in your care to safety.  The answer is NEVER to euthanize them and is NEVER to leave them behind.  A great plan that several shelters acted on in the Houston area was to reach out to partner shelters outside of the storm before it hit hit to have them take all their current animals so that they would be safe and that the shelter could then turn their focus on helping owned pets get to safety and reunite with their owners.

So ask your local shelter or wildlife sanctuary what their disaster plans are.  If they don’t have any, ask if you can help them prepare them.  Get the local first responders involved to include their expert advice.  There is no reason why an animal welfare group should not have a plan for when the worst happens.  These animals are depending on these groups to keep their best interests in mind, and that includes having a plan for all major disasters.

My heart goes out to all humans and animals affected by hurricane Harvey, and hurricane Irma.  Please don’t evacuate without your pets and don’t forget to bring food, water, a leash/crate, and their vet records with you.  If you can, call ahead to the place you are evacuating to to make sure they allow pets.  Most hotels will allow them during these natural disasters, but the Red Cross shelters typically do not (which is a total shame).  Be smart and be safe!