Look closely at the picture and specifically what is inside that coffin.  That is not the body of a person, that is the body of a dog.  Kye was a 3-year-old Belgian German Shepard and he worked as a K-9 with the Oklahoma City Police Department.  Kye was killed in the line of duty last month and was just given a full police burial.  The service included full police honors and a 21-gun salute.

Kye worked with Sgt. Ryan Stark.  That is Sgt. Stark bending over to kiss Kye in his coffin.  They had been partners and friends for two years.  The picture below is Sgt Stark holding the folded American Flag that had draped Kye’s coffin.  You can see Sgt. Stark wiping away tears.  Kye was chasing a suspect when he was stabbed.  Sgt. Stark then shot and killed the suspect.  Kye died the next day in surgery.  During the eulogy for Kye an officer said:  “Without question, Kye’s sacrifice saved the life of one of our officers. We will forever remain in your debt.”

The bond between officers and their K-9’s is amazing to me.  When an officer is paired with a K-9, it is intended to be a lifetime partnership.  They trust each other completely and obviously the office has a real bond with their partner. 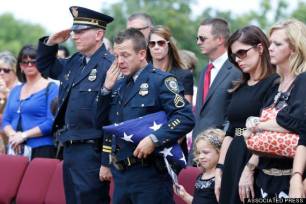 So why are officers so trigger happy with other dogs?  They obviously love dogs, and work with them as partners all the time – trusting them with their lives.  So why are there SO MANY cases of police officers in this country shooting and killing family pets?  Where is that disconnect?  There most definitely needs to be training with police officers in handling dogs out in the field.  With pepper spray on their belts, guns should never be a factor.  It is truly sad to lose a fellow officer, and companion like Kye.  I know it is the same for those owners who lose their pets when an officer decides to shoot them.  Join me in demanding better training for officers to handle animal encounters in the field.